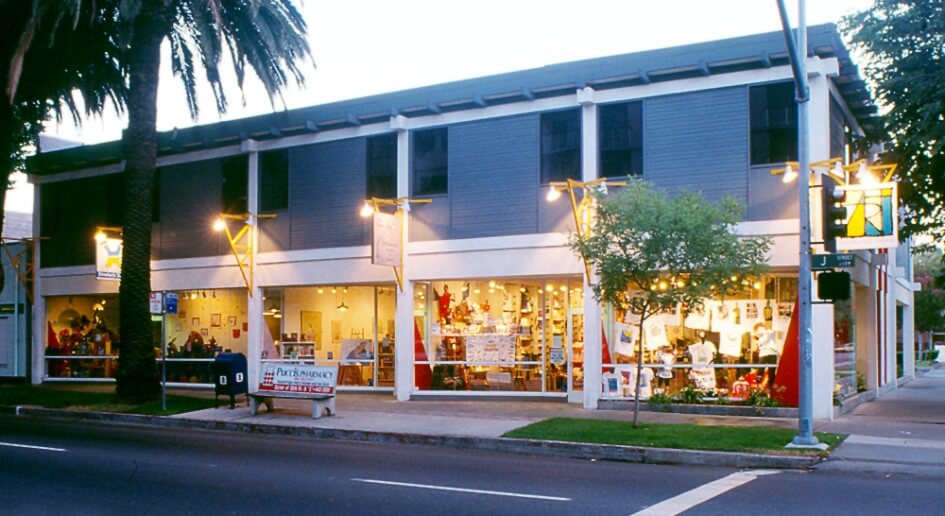 2500 J street is an urban infill renovation project, in Sacramento’s thriving Midtown neighborhood; the project involved renovation of a 10,300 square foot laboratory building into a mixed-use space, with retail on the ground floor and office space above. The project goal was to maximize the building’s retail presence on the street, keeping it consistent with the pedestrian focused, friendly, easy character of its midtown neighborhood.

The design added a colorful component to the street and quickly gained attention of retailers.

The new glass storefronts along J Street are set along an angle defining the retail space, and due to their angled nature draw the eye to them., transforming a building that receded from the street into a vibrant, active storefront that activates the entire block. A red triangular wall at each entry connects visually with the yellow triangular trusses projecting from the second story for signage and exterior lighting, further adding a unified visual interest. The design emphasizes the human scale along the well-articulated streetwall, to draw foot traffic in.

The second floor is devoted to office space and its entrance on 25th street is designed with large windows repeating the triangular pattern.

In addition, the business stairwell is well illuminated by windows creating a welcoming, airy entrance space. Electrical and HVAC systems were completely renovated throughout the building. Components of the structural lateral system were modified to accommodate the increase in storefront retail, allowing more access to storefront windows and street views.

The design added a colorful component to the street and quickly gained attention of retailers. The building was completely leased within two months of completion.