Thermal mass is a phrase one hears often in our corner of the industry, due to the fact that when properly used, it can significantly increase the efficiency of a given building envelope.  Although this idea now has a sort of buzz or currency, it’s actually one of the oldest energy control techniques, and was very common in concert with solar envelope design (deep overhangs, careful orientation of the building mass relative to solar exposure) from ancient times. This is not surprising, as prior to easy access to vast amounts of energy to pump into low-performing buildings, any building which did not sensibly use these strategies was in essence a failure, as it would often be too hot or cold to inhabit.

First, let’s establish how thermal mass can help with overall efficiency.  The slow absorption, storage and eventual re-release of energy impinging on the thermal mass assembly’s surface has several effects: the initial slow penetration/absorption means that it takes some time for the heat of the day to penetrate the envelope; the storage capacity of the material affects how efficiently this assembly functions, and the rate of re-release determines how wide the hysteresis of the temperature gradient inside the envelope is. 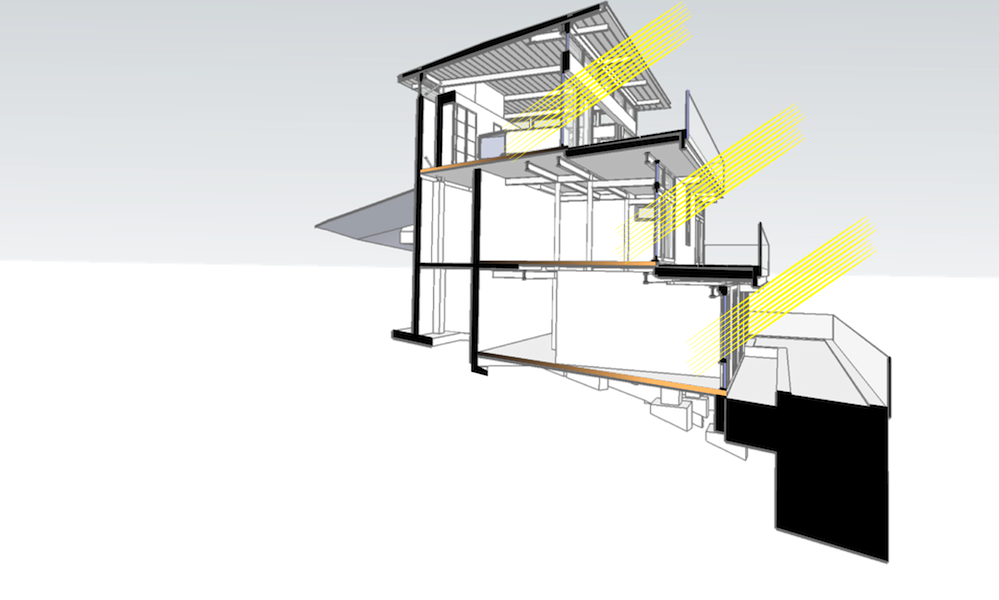 An example of this is sun shining on adobe, which warms slowly over the course of six to eight hours, stores that heat during the portion of the day where the temperature of the adobe surface matches the surrounding ambient temperature, and then re-releases that energy via radiation once the adobe is warmer than the surrounding air. If approached carefully, this can result in a close-to steady-state indoor environment, with very little or no requirement for additional energy inputs. This takes us back to basic physics: equalization of energy – if an assembly used for thermal mass “sees” (line of sight) a cooler material, some of the energy of the thermal mass will be radiated towards that cooler zone – this release will continue until the temperatures are equal. 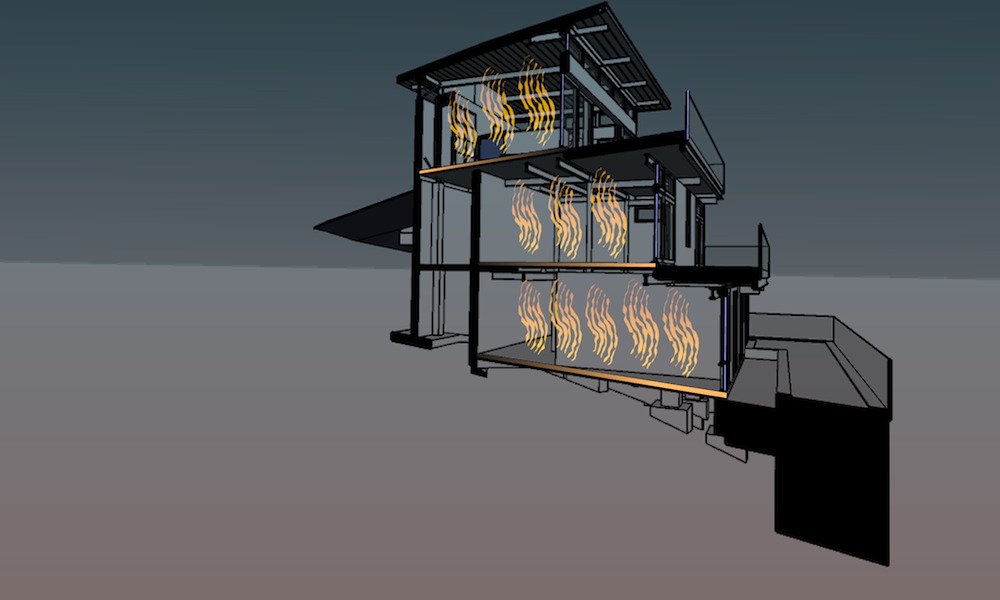 In these diagrams, direct sun is shining on slabs that absorb heat, and later, once the ambient temperature has dropped, re-radiate that heat into the occupied spaces.

The thermal behavior of a material is a direct function of its density, thermal conductivity and specific heat capacity.  Thermal mass is a descriptive attribute representing the best combination of these three properties for absorbing, storing and slowly releasing heat.

Materials with good thermal mass readily absorb excess heat without getting hot quickly themselves.  Heat may be from the sun or internal loads. As a result, materials most effective as thermal mass are those that have high specific heat, high density and low conductivity.

The equation for thermal conductivity in a general sense is:

In other words, it is defined as the quantity of heat, Δ”Q”, transmitted during time Δ”t” through a thickness ”x”, in a direction normal to a surface of area ”A”, per unit area of A, due to a temperature difference Δ”T”, under steady state conditions and when the heat transfer is dependent only on the temperature gradient.

In direct contrast, insulating materials, such as fiberglass batts and polystyrene foam, have low conductivity, and their density and specific heat are far too low to provide good thermal mass; metals have high specific heat and density, but their levels of conductivity are too high for reasonable use as thermal mass – all their energy is either passed through (not retained) or re-radiated far too quickly.

Thermal mass, in concert with natural ventilation strategies and good solar envelope design, form the core of many of our more successful projects.